On August 30, commencing at 7:30 p.m., the Third Hideyo Noguchi Africa Prize Award Ceremony and Commemorative Banquet hosted by Prime Minister Shinzo Abe was held at Meiji Kinenkan.
The ceremony held in the presence of Their Majesties the Emperor and Empress was attended by approximately 170 people, including African leaders who attended the Seventh Tokyo International Conference on African Development (TICAD7), co-organizers of TICAD, heads of international organizations related to health and medicine, and members of the selection committee for the Hideyo Noguchi Africa Prize.
[Movie]Youtube - The official account of the Ministry of Foreign Affairs of Japan (MOFA.ch) - 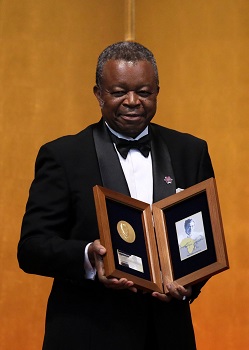 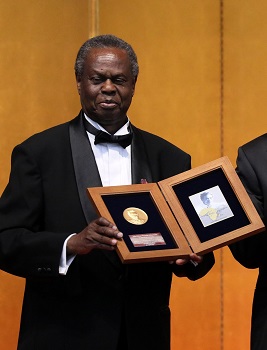 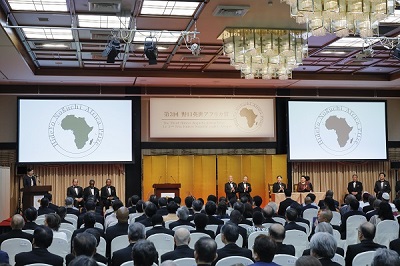 A scene at the awarding ceremony 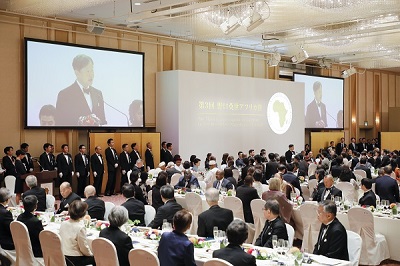 A scene at the commemorative banquet

Dr. Muyembe and Dr. Omaswa were awarded the prize. The next awarding will be held three years later.

At the award ceremony, Prime Minister Abe delivered an address to the laureates of the Third Hideyo Noguchi Africa Prize (Dr. Jean-Jacques Muyembe-Tamfum [Medical Research category; Democratic Republic of the Congo] and Dr. Francis Gervase Omaswa [Medical Services category; Republic of Uganda]). Prime Minister Abe lauded the achievements of both laureates and presented the medals, the citations, and the honorarium to the laureates. At the ceremony, it was announced that from now on, the Hideyo Noguchi Africa Prize will be awarded every three years. There was also a shakuhachi (Japanese flute) performance and an African drum (djembe) ensemble performance by Japanese and African children and others. The Commemorative Banquet that followed the awarding ceremony served foods made primarily with ingredients produced in areas affected by the Great East Japan Earthquake. The Commemorative Banquet was followed by shamisen (Japanese lute) and shakuhachi performances. 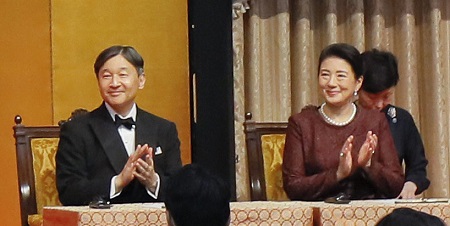 Their Majesties the Emperor and the Empress 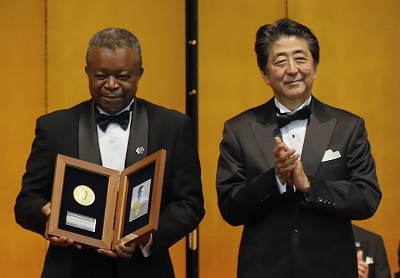 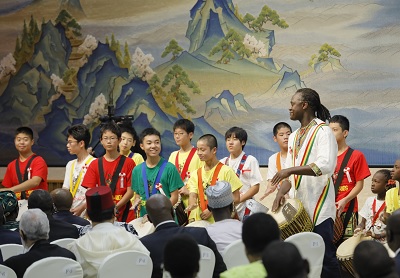 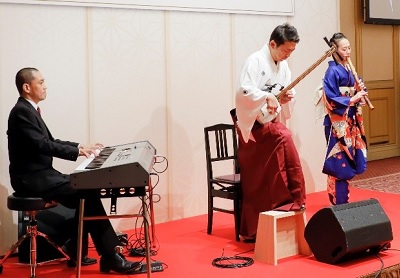 Speeches by the Laureates (summary) 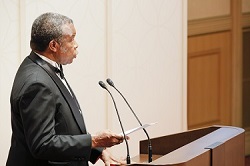 Dr. Jean-Jacques Muyembe-Tamfum
(Medical Research Category)
It is a great honor for me to receive the Hideyo Noguchi Africa Prize.
Having read the biographical manga about Dr. Hideyo Noguchi, I realized that I had been a true disciple of him without knowing it. His spirit of endurance, hard work, courage, and perseverance was already in me.
I owe this international recognition with which I am currently honored to my beloved family who has always supported me and my dear homeland. I hope that this medal, which I am holding with pride, will also be the pride of the President of the Democratic Republic of the Congo and my country.
My long career has been full of risk and sacrifice indeed, but what is most important to me is that, together with my partners at home and abroad, we have generated new knowledge on the Ebola virus disease, and have shared that knowledge to save the lives of many people threatened by this disease.
In conclusion, I am committed, together with Dr. Francis Omaswa, to perpetuate Dr. Hideyo Noguchi's spirit of scientific discovery and social justice among the current and future generations of African researchers. 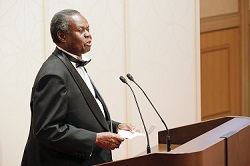 Dr. Francis Gervase Omaswa
(Medical Services Category)
It is a great honor for me to receive the Hideyo Noguchi Africa Prize.
Dr. Hideyo Noguchi demonstrated in his life a spirit of global solidarity and humanity. This is the spirit which today’s world needs more than ever. Today, self interest and greed are in the ascendancy in all parts of the world. The future of the human race and the planet earth calls for us to return to the common good, caring and serving spirit of Hideyo Noguchi in order to save the world. The world today needs more people with the spirit of Dr. Hideyo Noguchi. This award therefore represents a call to action for all people everywhere.
It is in pursuit of this common good spirit of Hideyo Noguchi and to advance his mission that my family has decided to commit a portion of the Prize award funds to a public cause in memory of Dr. Freda M. Omaswa, my daughter who passed away three years ago. Like Hideyo Noguchi, Freda was a highly trained physician specialized in infectious diseases. We will discuss and develop this proposal further with potential partners, and I call for your support.

The City of Yokohama held welcoming events for the laureates of the Third Hideyo Noguchi Africa Prize. After the luncheon hosted by the mayor of the city, Ms. Fumiko Hayashi, the laureates attended a ceremony held at Nagahama Hall in Nagahama Noguchi Memorial Park and were welcomed by students of Bunko Elementary School. Then, the laureates visited the Former Bacterial Laboratory where young Dr. Hideyo Noguchi worked at as a medical quarantine officer and the museum of the old Nagahama Quarantine Station. They visited an exhibition that presents the condition of the time when Dr. Noguchi was working, the medical instruments then used, and the history of the quarantine station. 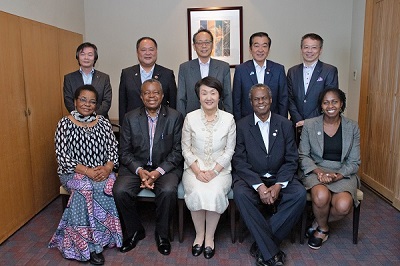 Luncheon hosted by the mayor of the City of Yokohama 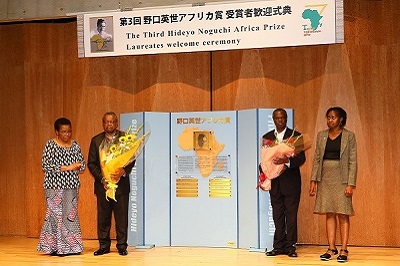 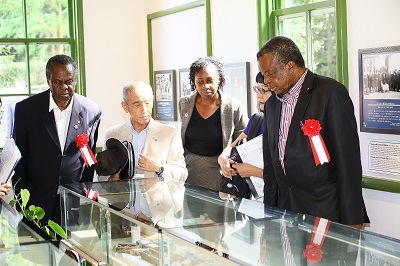 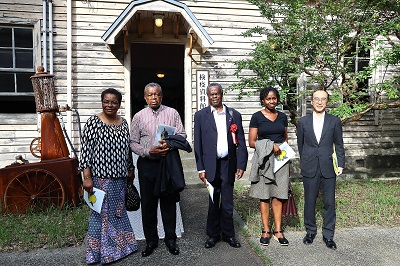 The museum of the old Nagahama Quarantine Station

The laureates visited Fukushima where Dr. Noguchi was born and raised. The laureates met Mr. Masao Uchibori, Governor of Fukushima Prefecture, and were given the certificate of "Honorary Goodwill Ambassador of Fukushima." They also attended a luncheon hosted by the governor. At the Hideyo Noguchi Memorial Hall, they were welcomed by Mr. Hiroshi Zengo, Mayor of Inawashiro Town, Mr. Yoshifumi Takeda, President of the Hideyo Noguchi Memorial Foundation, and children of Inawashiro Town, and toured the hall and Dr. Noguchi's birthplace. After that, they went to Aizuwakamatsu City and visited the former Kaiyo Hospital (currently Memorial House for Young Dr. Hideyo Noguchi) where Young Noguchi had an operation on his left hand, and the Suehiro Kaeigura sake brewery operated by a relative of Mr. Sakae Kobayashi, Dr. Noguchi's former teacher and mentor. At the brewery, they attended an exchange event with high school students hosted by Aizuwakamatsu City. 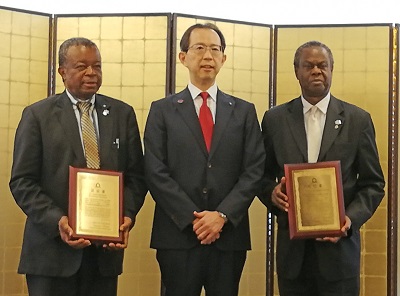 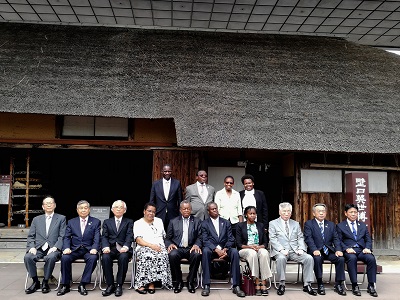 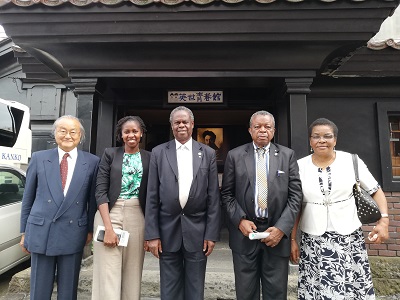 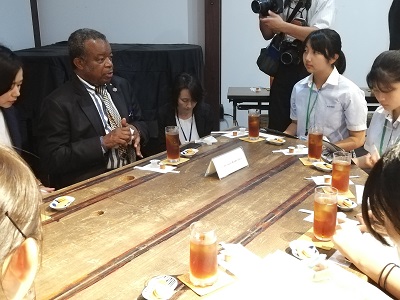 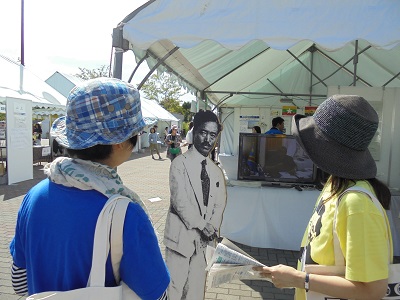 Invitation for Donations
for the Hideyo Noguchi Africa Prize Fund

As part of the prize money to be awarded for this prize, we are inviting donations widely from those who support the idea of this prize. Your goodwill donations will be used to support the activities of people who are playing active roles in improving medical research and medical services in Africa.
About inquiries for donations, please contact Citizen Participation Promotion Division, Domestic Strategy and Partnership Department, Japan International Cooperation Agency (JICA).
E-MAIL : jicata-kifu1@jica.go.jp